Day 9/14 late vegetation
31% 78 degrees fahrenheit topped today. peeked at roots all look healthy and white, bottom roots have taken a darker color under water. although they have wrapped them selves around hose lines… Plant is hanging a bit to left side after moving leafs around to trim dead or dying leaves. Bottom of stalk is a bit thinner. I pushed her up a bit too! Hope she’s okay! 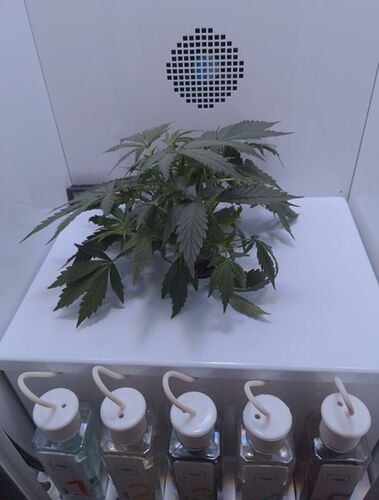 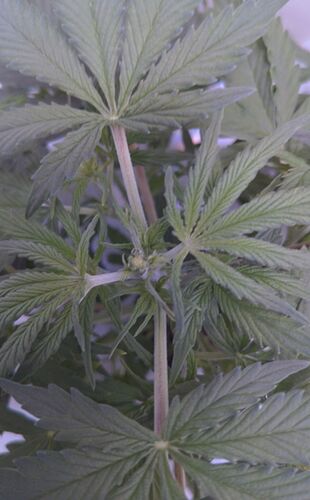 Might need a closer side view to determine. A lil blurry on my end.

Looks pretty good. Hard to tell as @Time2grow has stated. Looks like you might have FIM’ed her possibly but if so that wouldn’t necessarily be a bad thing. Could be a normal cut though!

At the very least, the growth tips don’t look damaged.

I think I may have dimmed the top is that okay?

White Widow: Late vegetation day 12/14
38% 73 degrees fahrenheit did a drain and fill stem is tilted but growing a lot! Should I extend vegetation? 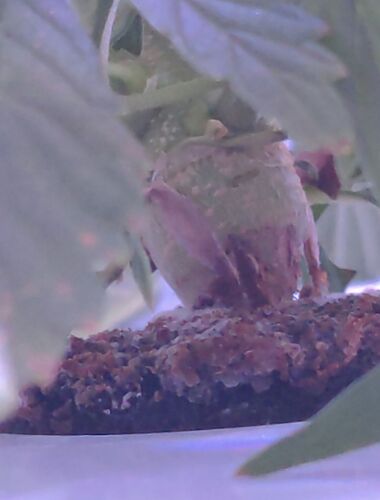 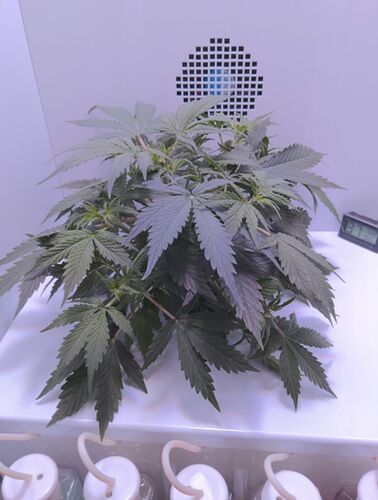 Hmm lookin’ good… except I feel like that stem is looking a little worrisome! You might want to think about moving your pod up and try to dry it out… Is it wet down there? It kinda looks like it’s deteriorating at where it meets the pod. This can eventually weaken so much that the plant will fall over, especially if you said the plant is leaning!

Getting the pod up and raised up and dried out is the first step. I suggest using a slight twisting method from the bottom while you lightly put some upward pressure so you don’t break it free all of a sudden and shoot it up too far! This has happened to me.

Also check this out:

Plant Falling Over (Damping Off)

The only solution I’ve had work is this:

Cut off a bit of a large drinking straw, say 2 inches. (Think McDonald’s straw)
Cut a slit down the entire side of the straw.
Open the straw and gently slide it around the stem, allowing the top to poke out.
Push the straw into the coco pod a bit to secure it.

Now your plant is in a ‘body cast’! This will get your stem straightened and your leaves facing upward for at least a small chance of survival. If she does pull through, we can extend the veg time to make up for the shock of getting sick so early. Probably need to add 2-3 weeks though and in that time you can be far past this spot, your choice on heal or restart. 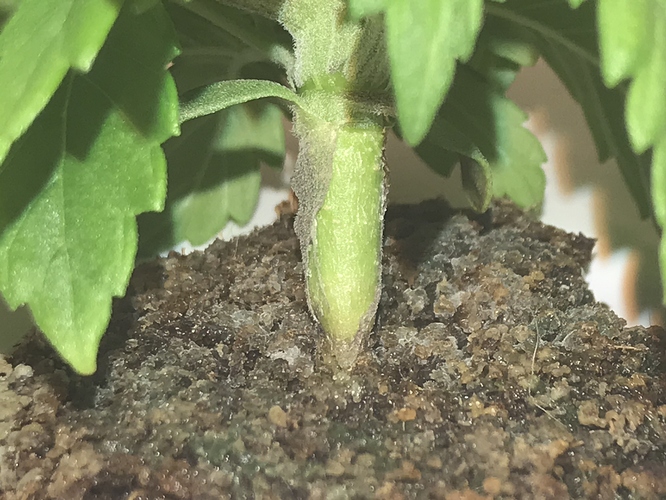 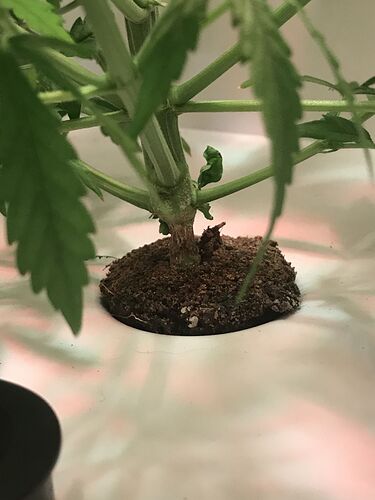 And the body cast that @Stephen has referred to: 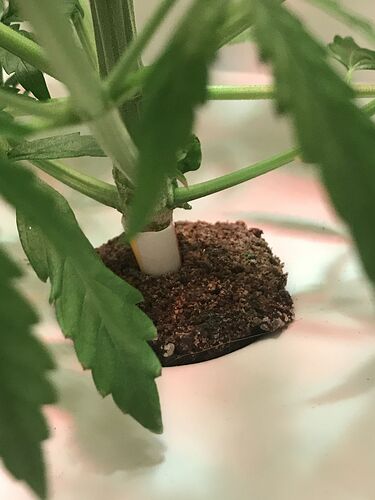 Start of damping, but recovered after pod moved up and dried out allowing more oxygen:

RIP Amnesia Haze, lived about 11 weeks, will be missed 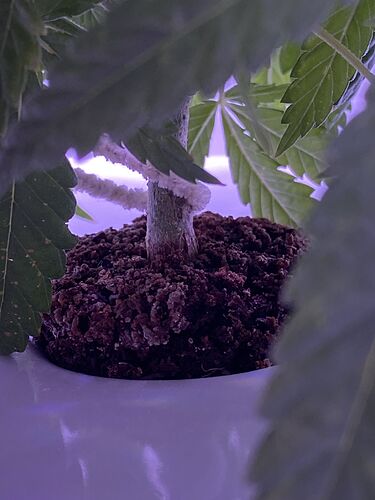 Again, if the pod is wet and leaves moisture on your hand after a quick touch, that’s too wet !

I could be over exaggerating only because your picture is slightly blurry. But to me, it looks like some damage. Ideally the stalk would be completely green above ground.

Also… this is what can happen if untreated or gets too bad: 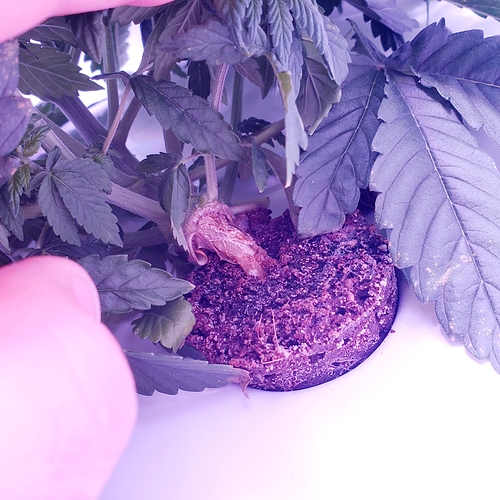 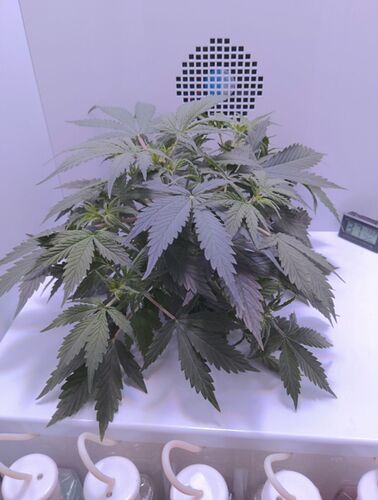 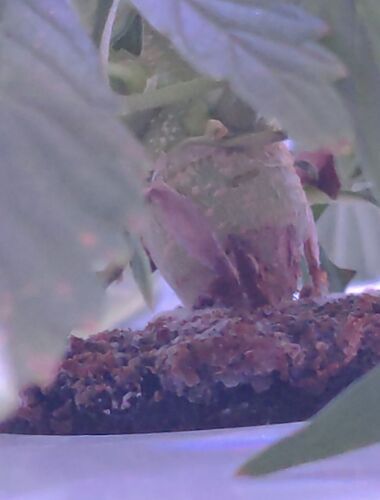 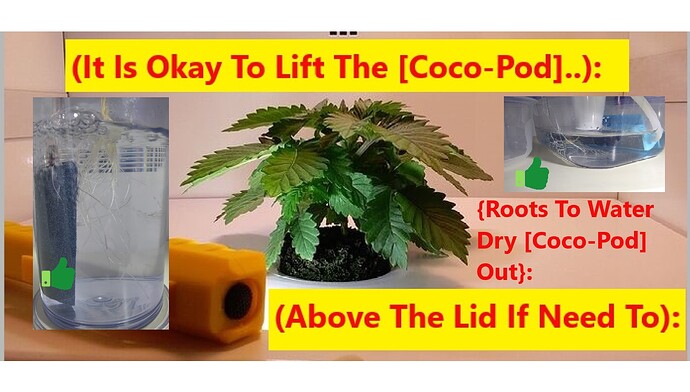 @Joandy93 Hey bud, I would start by pushing that pod up, next try adding fans to the pod as well as stem to dry it out. Another helpful trick that was shown to me here was cut some paper towels and throughout the day let them soak some of the water of the Pod-- and finally add support to the stem with some string of sorts and I would cast her up ASAP, just make sure the cast has a slit in it to get air flow as well. Wedge the piece of straw in the pod and around the stem, good luck dude.

late vegetation day 13/14.
Starting to smell weedy opening door lol. Pushed pod up today about an inch. The are roots visible around pod top hope that’s okay being hit by LIGHT! I did some pruning today. About to head into transition to flower 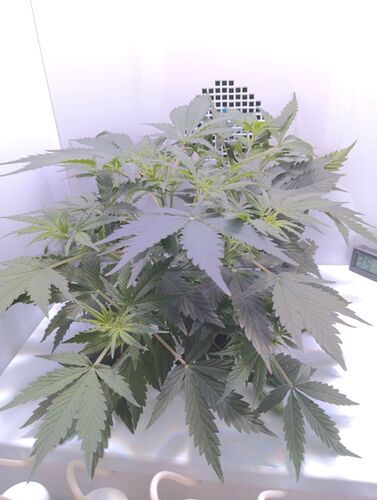 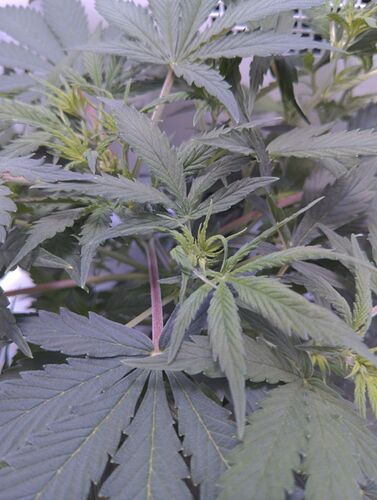 33% 73.6 degrees fahrenheit growing like wild fire, even with tilted stalk. Stalk is strengthening pushing pod up. I also tried straw to brace it but stalks too thick. Pruned a little more on tilt side to let up on wieght. Seems to be growing great still! Hydroguard got lost in mail. So I reordered it. 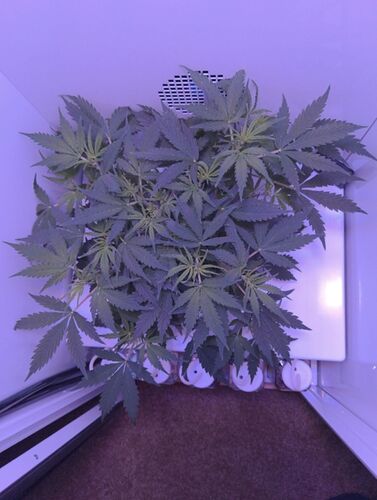 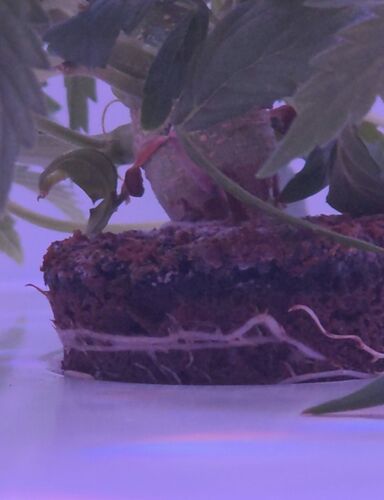 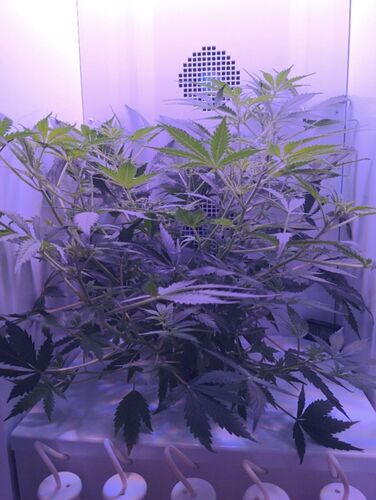 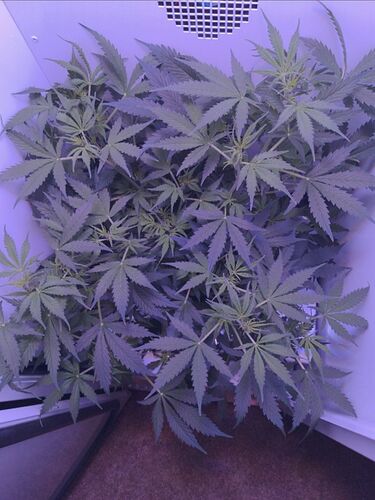