Super Silver Haze by ILGM - First grow (from a seed)

thats normal. If you put the seed in the pod can take up to two weeks to break. But she will, pod looks a bit wet, maybe keep it above the line for a few days

Slow growth. Took a peek at the roots, they are just coming out now, and it looks like the bottom of the pod was pretty wet. On top it was dry on the (mini) fan side, and damp on the other. I pushed the pod up.
The leaves are a little curly maybe, or just not stretching out yet? I think the brown spots are where the leaf was touching the pod, but the white ones just appeared.
Anything I need to be concerned about?
(Added Hydrogaurd and Recharge, temps 86 Hi air - 78 Hi water) 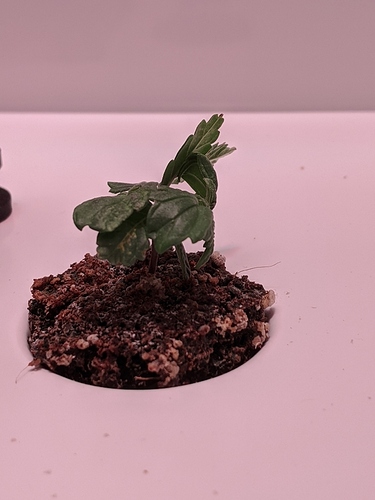 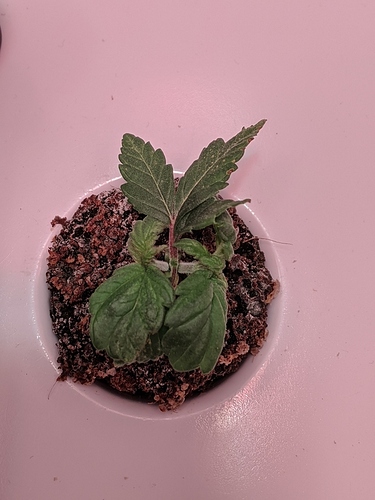 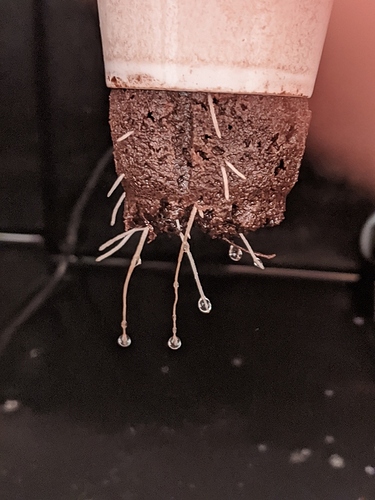 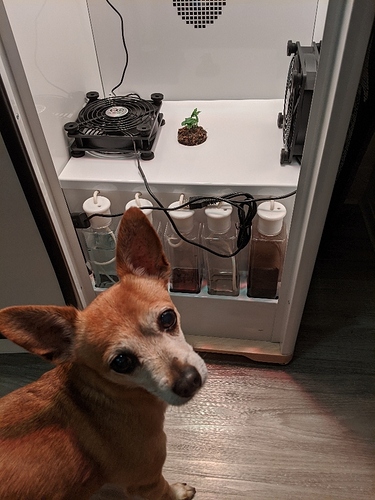 Help! - I have a problem with my plant.
My unit is screwed up in some way and it had filled my tank last week even though I was in late veg stage. I had not visually checked the levels on the week before’s fill, and found out during the drain today when I emptied an entire 2.5 gallon bucket out. When I filled it again it went all the way to the top.
I have a ticket in to support and I suspect this is related to my lights going out when it switched to late veg stage.

But the help I need from you growers is what, if anything, should I do to this plant? You might not see it in the pics but the stalk is strong and a little thick above the weak part you can see that is bent, but its still not really growing up straight - kinda out to the side.
Also - I extended late veg stage today, I assume I will be doing it again, but when do you know when to move forward?
I trimmed off the spotted leaves. 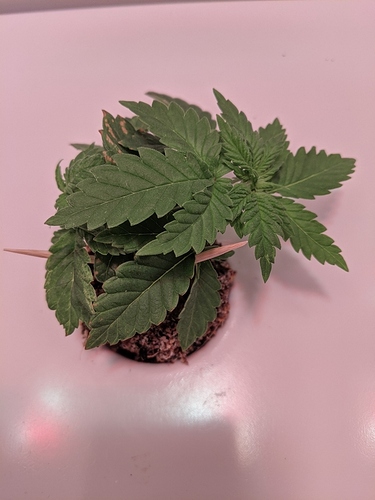 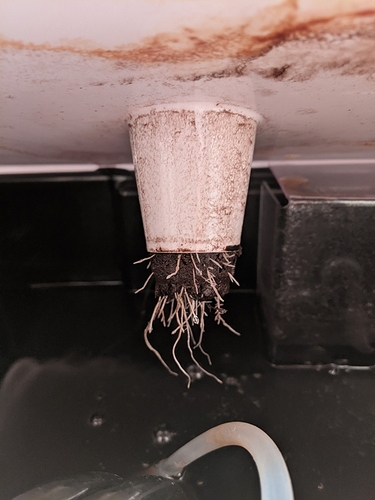 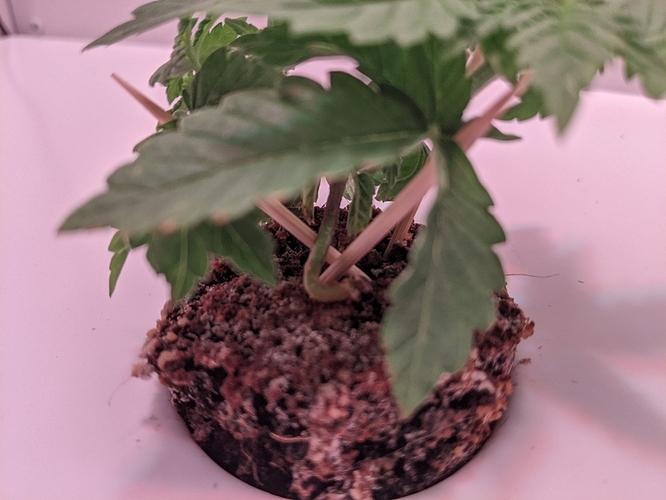 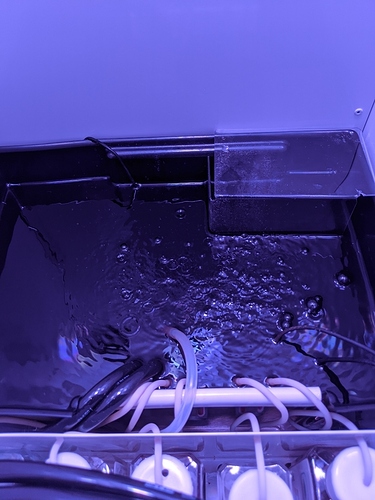 Looks ok to me. Did you have dampening off

Ok, glad to hear that. I was worried dampening off was starting. Because of how it was brown and not strong at the base compared to above. And that was contributing to it falling over.
I went in and setup a better brace this morning. I was happy to see the pod seems to be drying out faster this time.
But I also got a better look at the underside and I see what looks like a topping split. It seems to be growing healthy above that split. I also see my seed husk there, and that could be what made it grow horizontal at the base?..
Could that be keeping it from getting as thick as it should be there?

Also: I felt I was using too much of bottles 2,3, and 4 so I started marking them 3 weeks ago. This week was completely different with 1-4, none got used. I did use the usual amount of bottle 5. 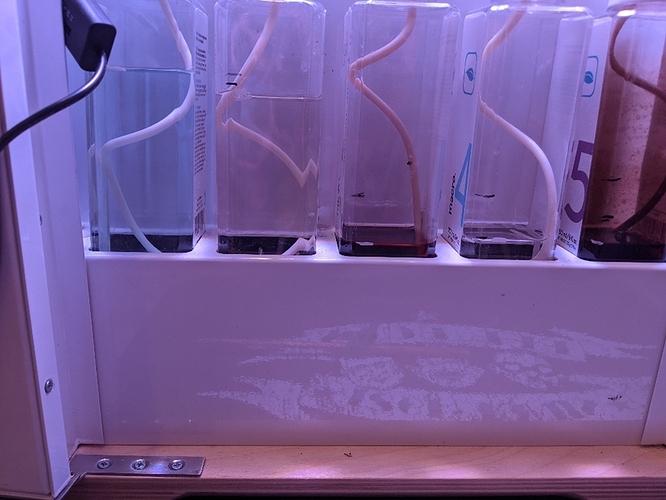 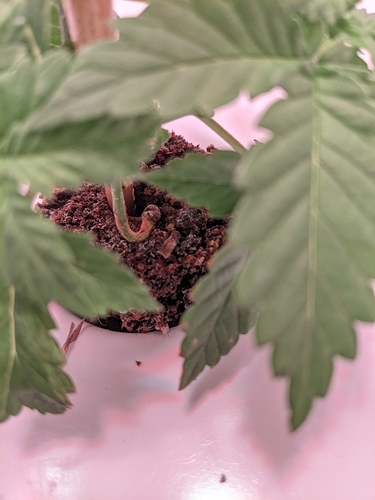 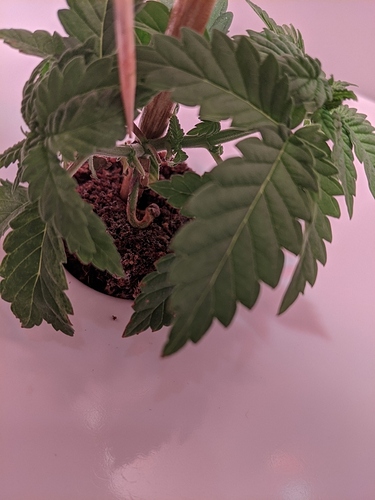 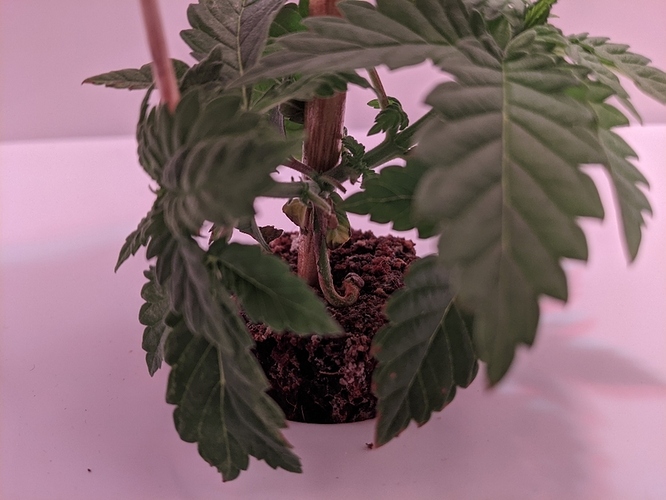 Is this a first grow with those bottles if so thats excessive nutrients used. Open a ticket for sure.

Its actually my second grow.
I tried to transplant a clone for my first, but it suffered from dampening off. (Its doing great on my patio now.)
It used the bottles for 2 months.

Id open a ticket just to get them to check. Dry and push the pod up a tad to dry out too

It turns out if you extend your schedule near the time that you drain and fill you can mess up the process of adding from the bottles. Something Grobo is fixing in the future.
I added missing bottles 3 & 4, and dropped the water levels manually. And now the roots are really growing and reaching down for it.

And Support says dampening off happened at the stem, but not at the roots.

Things seem to be going better. Even though I found a big bug locked in and munching on her!!

Support told me my water levels were supposed to be at the top and I should not keep manually lowering them after I had already done so last week. But it seems lowering them is what was needed at least for a week; the pod dried out, the roots stretched down, and now the plant has started growing up instead of sideways.

Even though support told me my water levels were supposed to be at the max, when I filled it this week it went to second float only. So I am hearing info from them that is conflicting with what the Grobo is doing. Any ideas why, or what could cause this?

I extended my late veg stage for the 2nd time today. I assume that was the right thing to do?
It seems almost time to do a topping clip; but she also seems to still be recovering, and the nodes i am counting are not branches - just leaves… 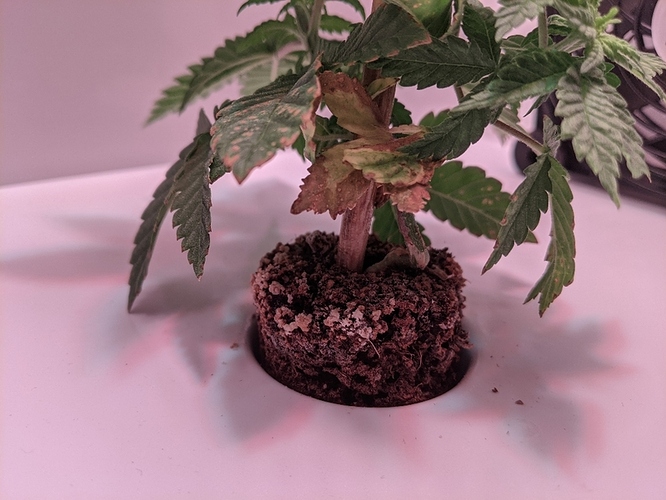 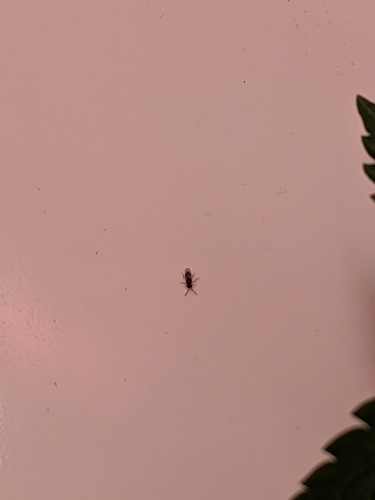 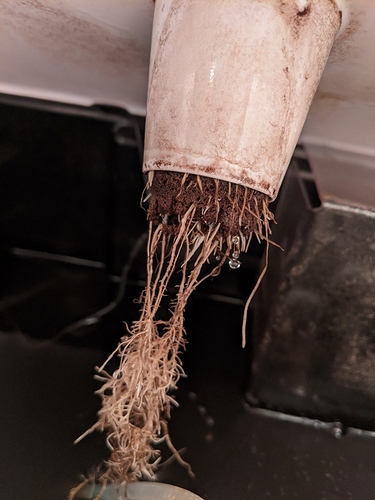 After doing some work. 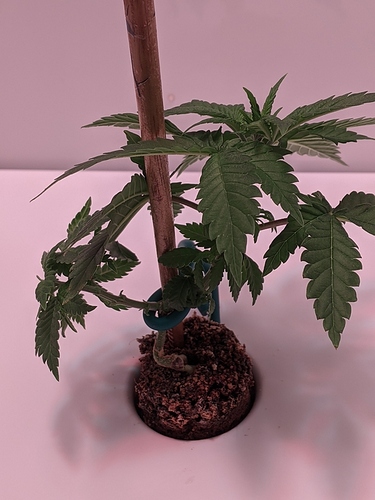 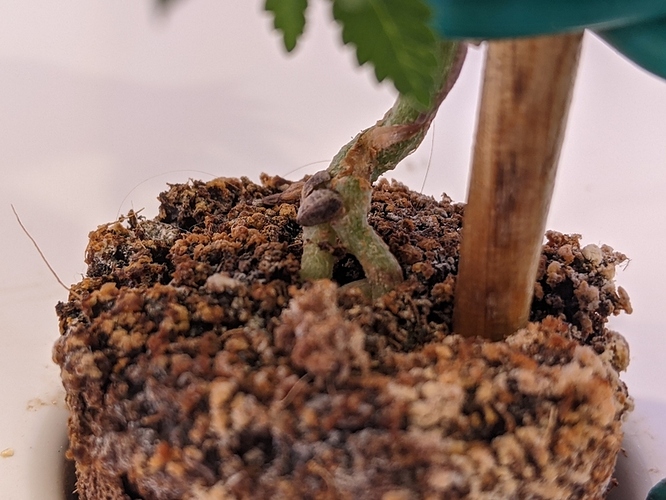 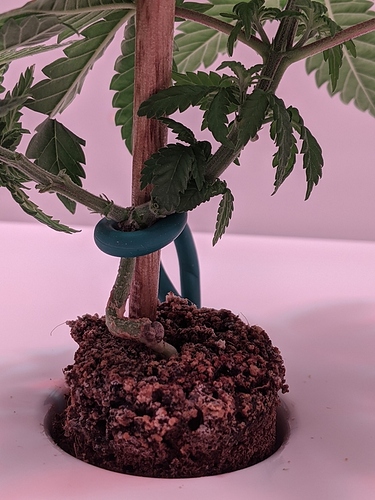 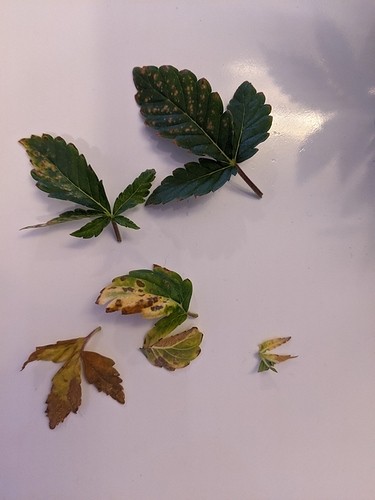 3 days after I took these pics there are not any new brown spots and there is more growth.
Varmint was eradicated.

filled it this week it went to second float only 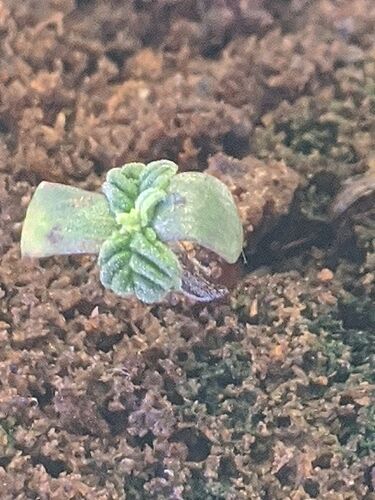 No - they do not go bad Is there something up with your Coco Pod @Dew? Here’s a few suggestions: -if it’s hard and falls right through the hole in the water tank cover try soaking it for 15 minutes to regain its full size -if it’s got white/green residue on the top of it, gently brush it off or agitate the Coco Pod until it’s gone Hope that helps, Chris.

((#CocoPodMold)): ((#CocoPodFungus)): [Coco-PodMold] https://www.allgrowers.com/search?q=coco%20pod%20fungus https://www.allgrowers.com/search?q=coco%20pod%20mold%20 (What I would do in your case is dry up your [coco-pod] because you don’t want it wet at all after the [GerminationStage]): (Sop the wet up with a paper towel and fan dry): (Then [{gently brush it off or agitate the Coco Pod until it’s gone}…

Thanks @Chris, Great question. Here is what you will find in week 2 of your notifications: Your seedling is fragile and you can help it thrive! Your cannabis seeds have popped and will start sprouting into a little seedling! However, your seedling is very susceptible right now to a serious problem that many other plants face in their early stages called damping-off. This is a serious condition that causes the rotting of your plant stem and root tissues at and below the surface of the CoCo Po… 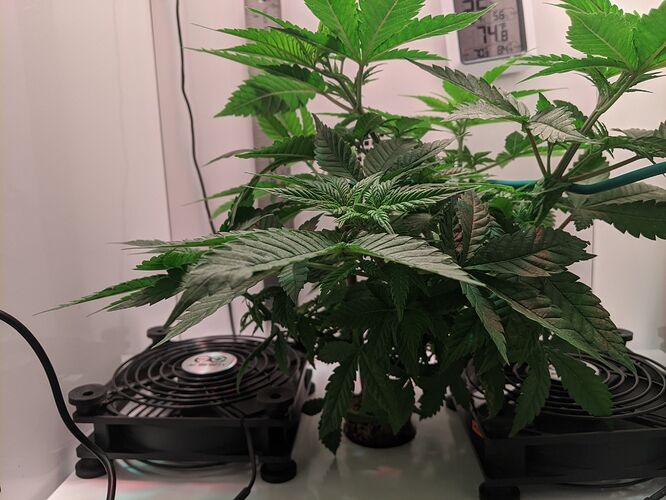 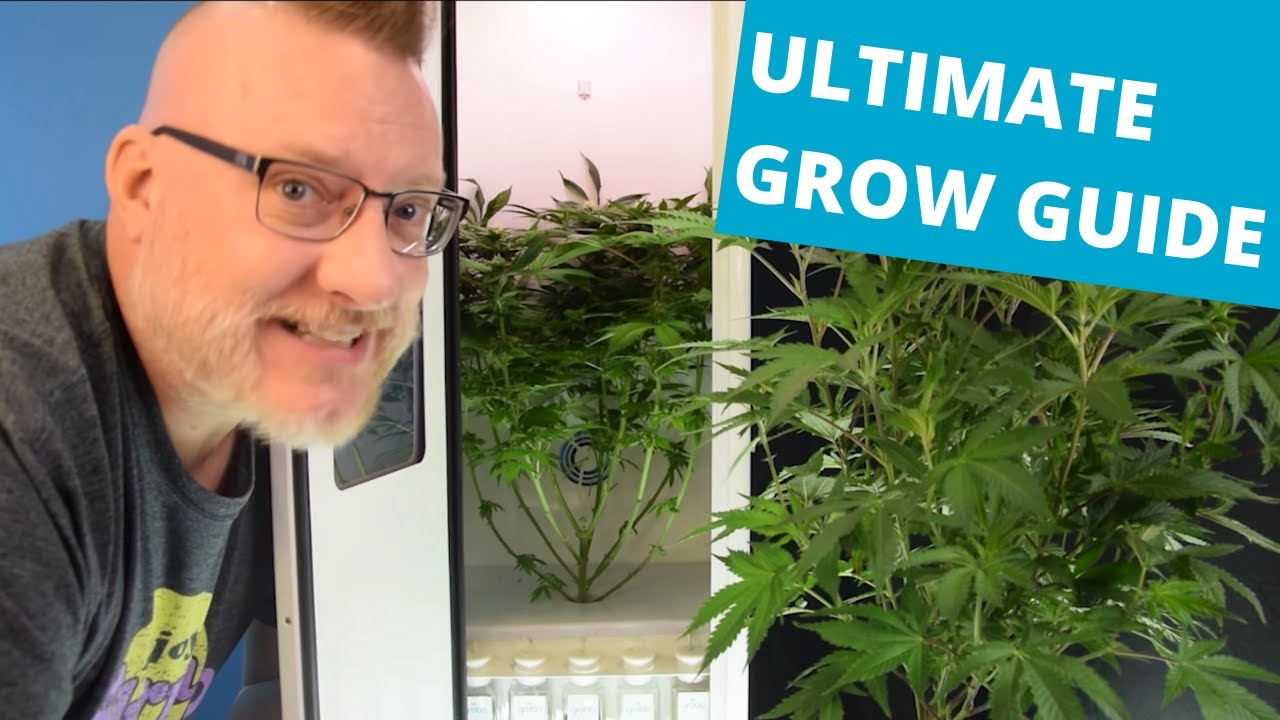 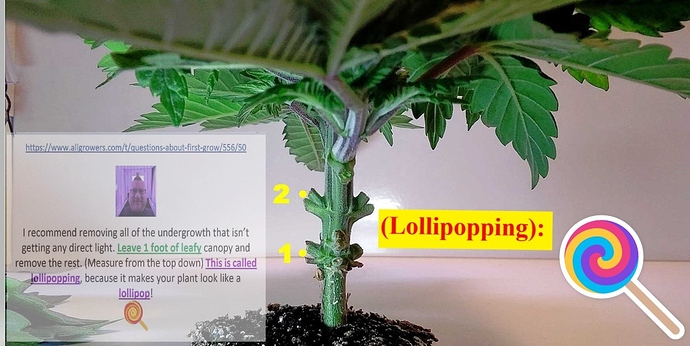 She has recovered well from stem and grobo issues.
It’s day 36 of late veg.
I topped once.

Should I top again?
Should I trim more? 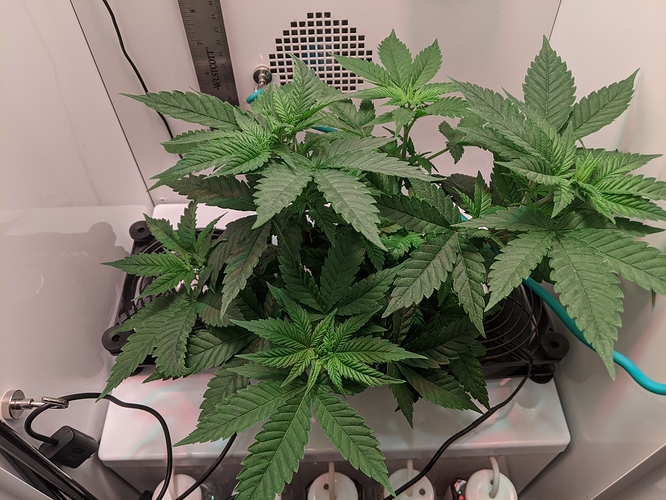 I’m growing the same seed and its an amazing plant.
I’m on day 72 and she already drank all of bottle 3-4 she does drink a lot.

If you are in late veg I would trim a bit before you get to flowering I was just removing new life growing on the bottom with no light. I didnt do much trimming…

Did you top it at the 5th node?

I just topped it last week, the 2 topmost shoots are from that. I believe it was the 5th, but im not %100 sure. It was hard to tell.

Im on day 64, only a week behind you. She was a late bloomer and we had a couple issues in the beginning. She is strong; im glad I waited it out and did not start over.

I started off with half bottles; but yes, I already had to replace them!

Getting ready to setup a screen. Am I ready for transition? 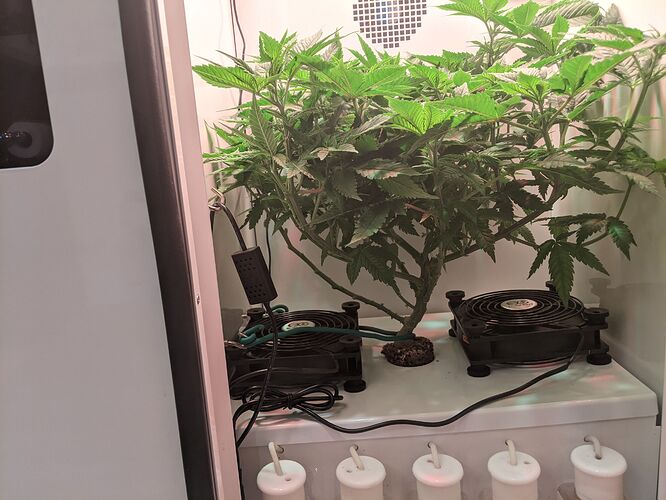 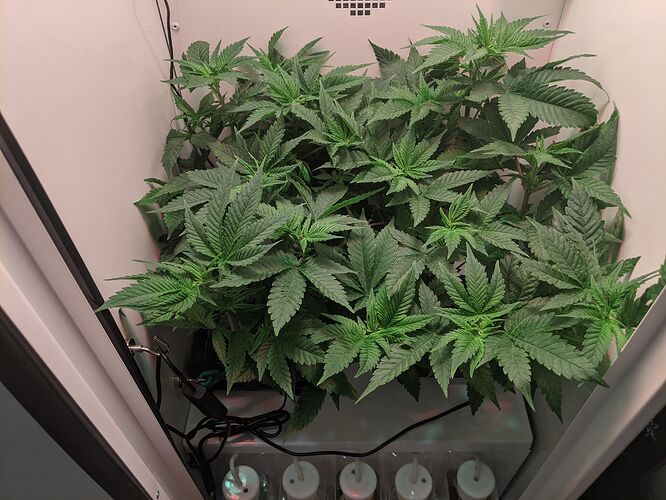 Since my last plant got huge, I would probably flip into transition at this stage for sure to avoid it getting too big after the stretch. Looks good imo, I think you probably could if you wanted. Grobo recommends being to the 2nd fan before transition, it looks like the highest points of your plant are touching that level

Waiting for her to recover from adding screen, trimming, and a final top cut. Transition in 3 days… 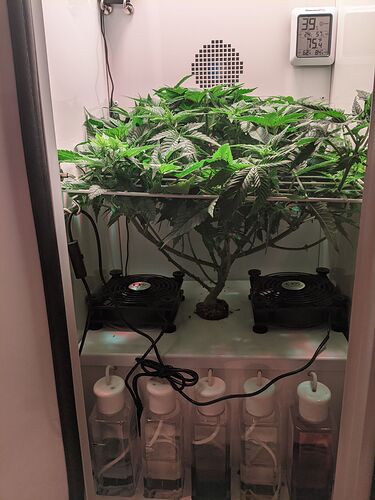 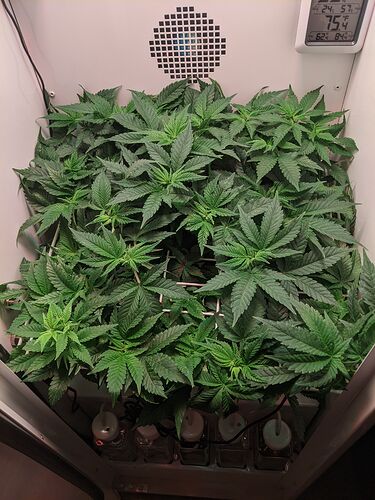 …pretty sure leaf damage is only on leaves I tucked or bent.

That Screen must have took some doin

Must say though that’s one nice looking grow m8

Only hope my First born is goin down the same road 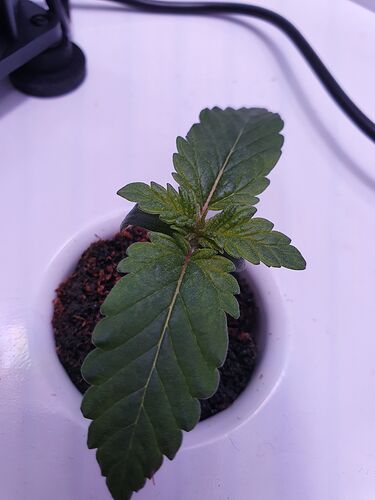 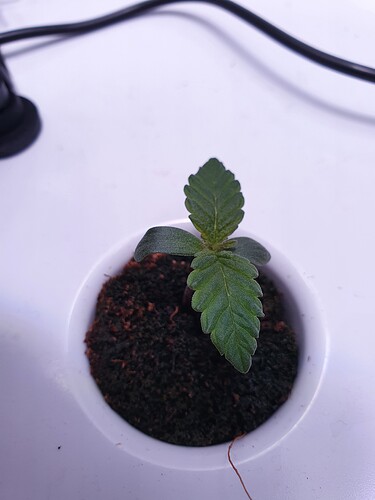 @Gmann - I found using magnets and gardening wires worked great to spread out the canopy before using the screen. (its a kitchen shelf attachment a lot of growers here use)
I was actually forced to wait to introduce the screen because my stem had dampened off and needed the wires to straighten out. That happened because my top float was not working properly. And because of that I was removing the plant a lot more often than I would have liked to check water levels. The screen would have made that harder.
Grobo support sorted me out with a new float and replacement directions the week before I was about to transition.
But I like the way it worked out, and I think ill do the same next time.
(except for the rot issue