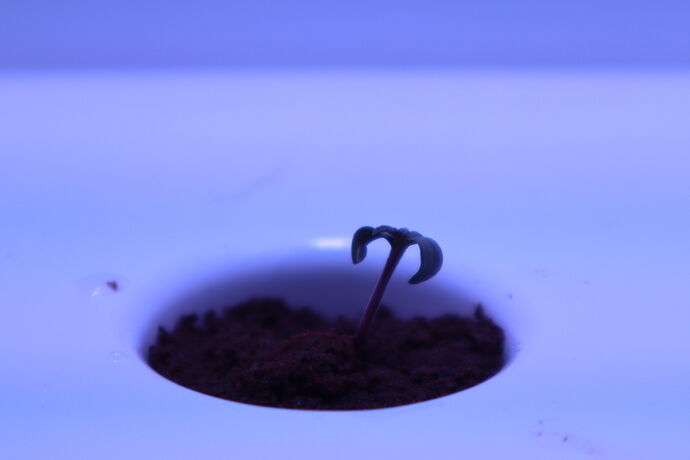 This is one of my plants, Ilana, that is now in early vegetation stage. This is back when she was just 6 days old. Just 2 days of popping up and saying, “Hello, WORLD! I’m here to grab you wherever you let me!”

I’ll add some newer pics soon. This is my first grow of anything besides some veggies in a garden in my backyard. So far I’m pleased with the progress.

Looking forward to some new pics!

Nothing wrong with lovin’ your plant…! 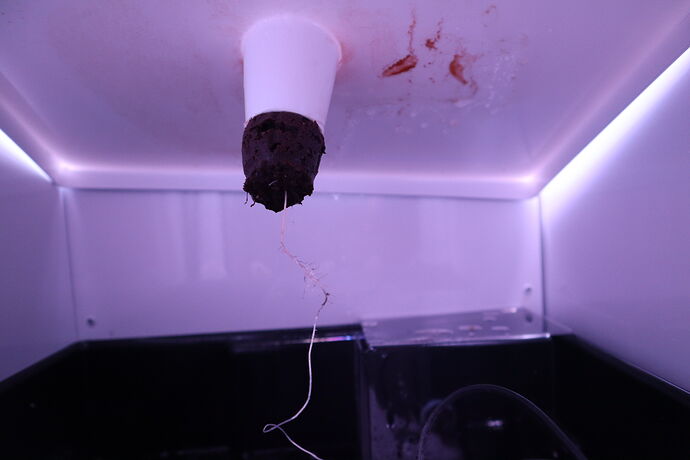 First off, a quick question. I’m assuming the reddish/pink gunk on the bottom is mold of some kind. What should I do about it?

Illana is looking hotter every day. Abbey is finally catching up. Abbey continues to be crooked, but maybe that’ll improve soon. I don’t plan to do much intervention yet as it doesn’t seem bad. Ilana has a little bit of discoloration on a tip of a leaf, but it seems like that’s prettyu normal, so I’m not worried about it, yet.

Both roots are starting to come along nicely. Ilana has one long one. Abbey has a bunch of them coming out. It’s weird because Abbey developed visible roots later.

If anything, I think Ilana tends to have slightly cooler temperatures at around 74-75. Abbey usually has them around 78-79. They are both in the same room, but Abbey is surrounded on 3 sides by walls less than a foot away. I even close the closet door on Abbey sometimes. I know it’s not as good for circulation, but it also warms it up in there. Any advice on leaving the closet door open or closed would be appreciated.

I bought some cleaning supplies but haven’t ventured to clean anything out of an abundance of…fear. Please let me know if you see anything. Thanks! 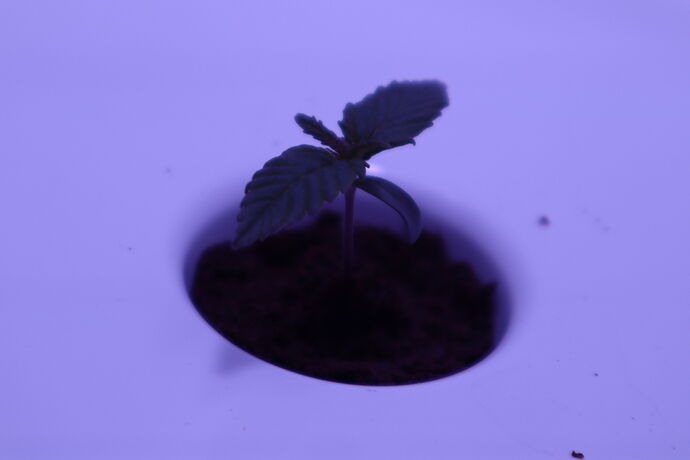 Here is a pic of Ilana.

This is Day 12 overall. From Saturday the 14th.

I had thought the Ilana reference might be that… now you say you have Abbey too? Most definitely!

That red under your reservoir lid is pretty normal. Almost everyone has it… it’s from the nutrients splashing up from the bubbles as far as I know… Just a nutrient stain, not mold. I wouldn’t be too concerned.

A little bit of isopropyl alcohol on a wipe would take it off pretty easy. Had to clean a bunch of that off of my lid after my first grow.

Yes! They are named after the Broad City gals. Originally did a play on Cheech and Chong, but my friend reminded me they are female plants. Love me some Broad City. Just introduced a friend to it and he watched the whole first season in two or three days.

Thanks for the tip on it being nutrients and not something more sinister. 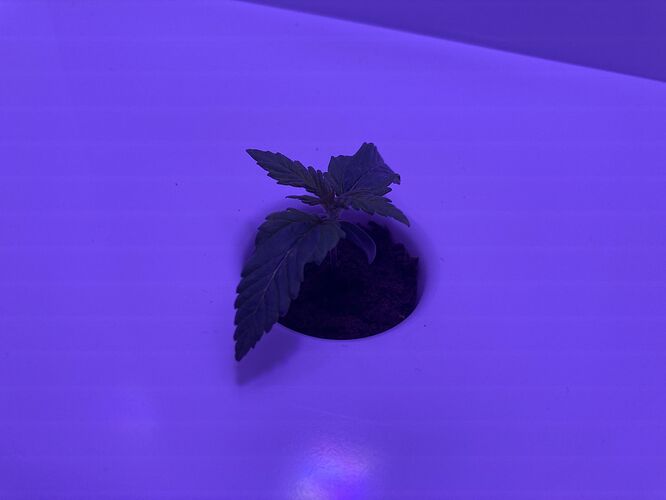 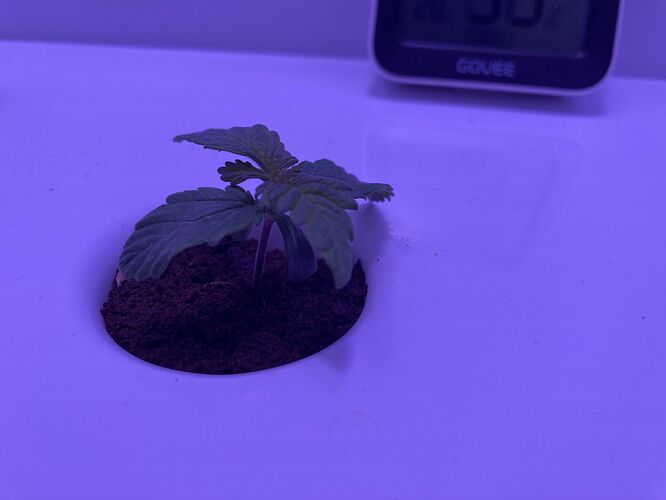 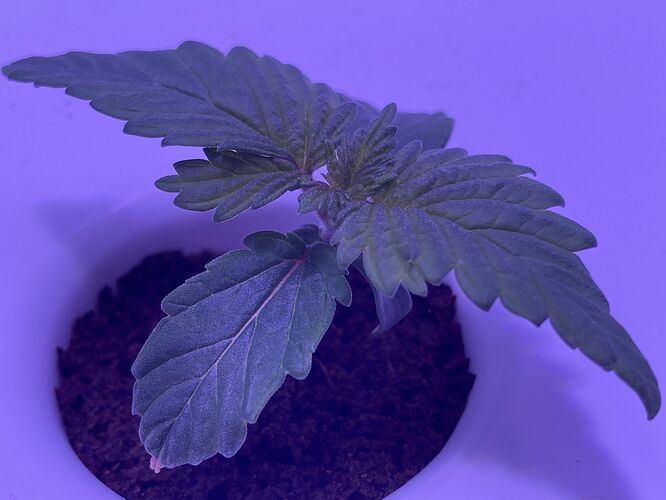 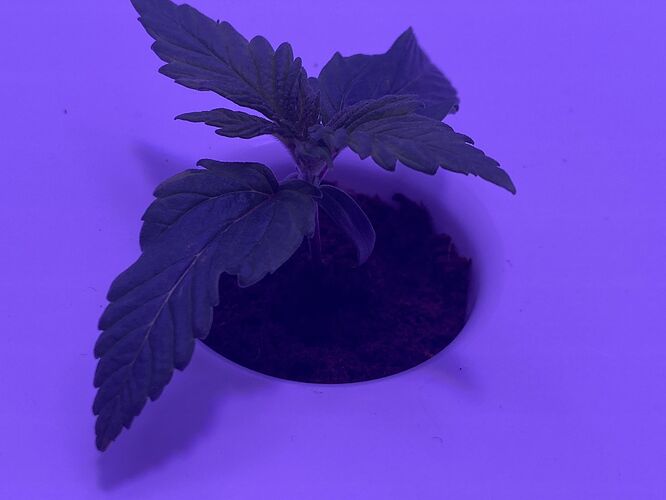 image4032×3024 573 KB
I don’t have kids but this must be like how parents take more pictures of their first born(s) than later kids. I can get enough of watching these things grow. Science is so COOL, man!

By the way, I’m claiming biggest, strongest forum member, so if anyone wants to contest me, step up and show YOUR muscles!! 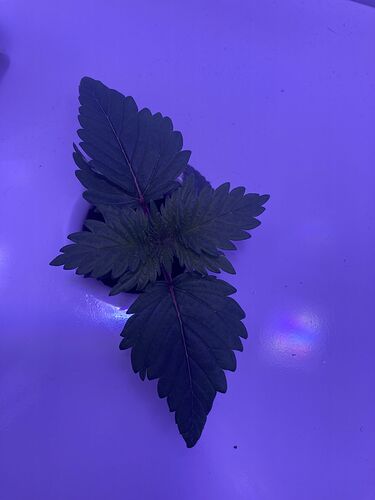 Abbi is pulling away from Ilana. She is looking gorgeous.

You should post them both together from now on so we can keep track of who’s who! Like a A / B comparison 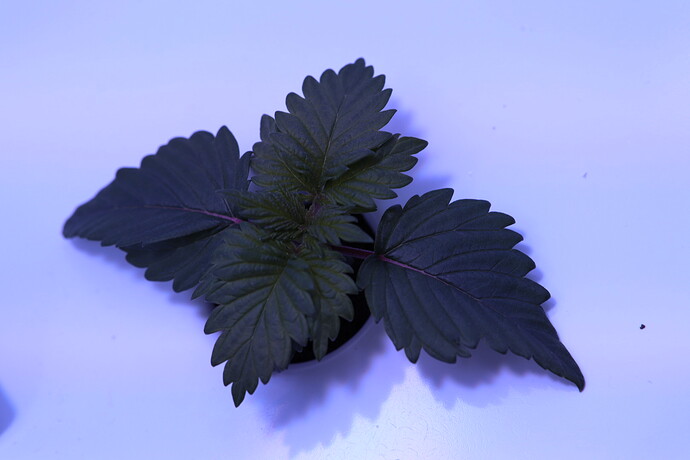 The one with brownish leaves that are curling up a little is Ilana. Abbi is the greener one. These are from yesterday. Both are on Day 20. I wish the roots were whiter on both. Ilana only seems to have only a couple very long roots whereas Abbi has several roots of more moderate length. Abbi looks gorgeous. I’m being patient. Actually looking forward to draining and refilling water. I’m hoping next refill helps Ilana catch up to Abbi. Not sure why the discrepancy. Abbi is in a closet and it tends to be slightly warmer. Not sure if that’s enough to make a difference or not.
I also noticed Abbi has more pH fluids left. Ilana has been using more. 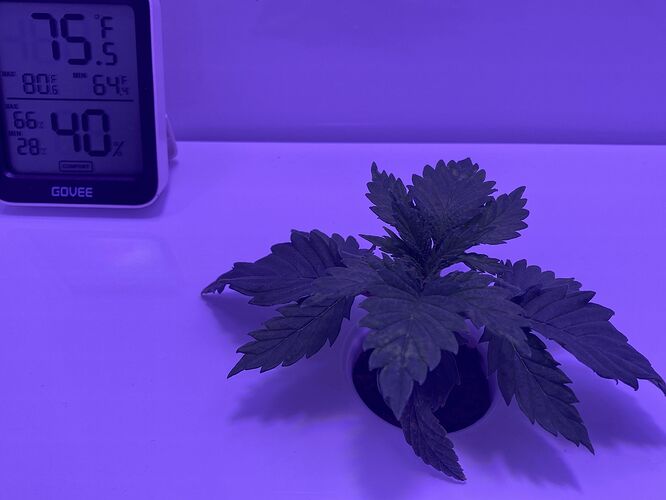 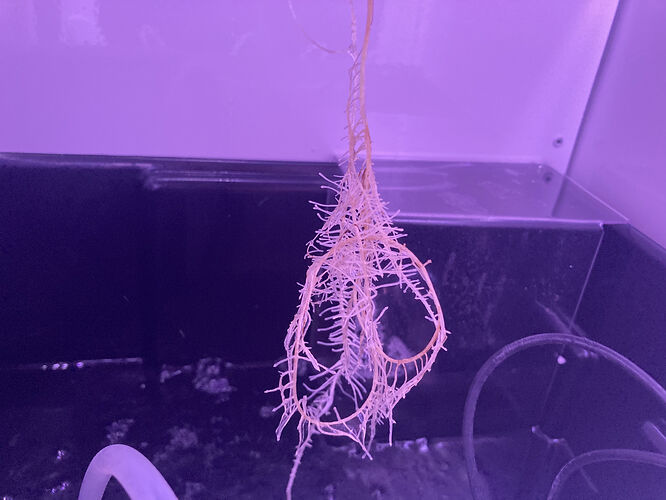 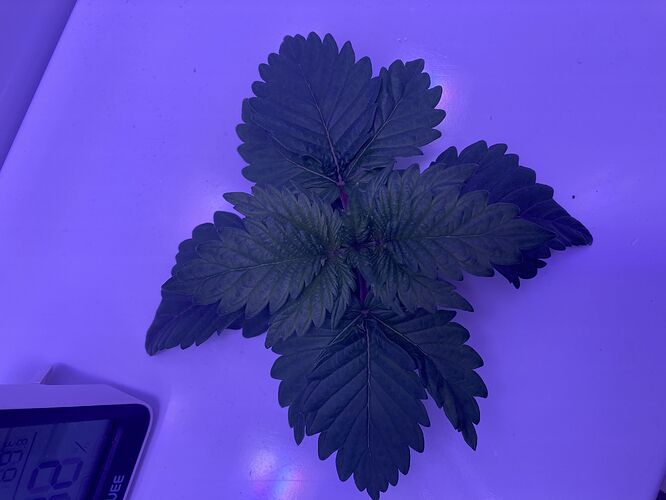 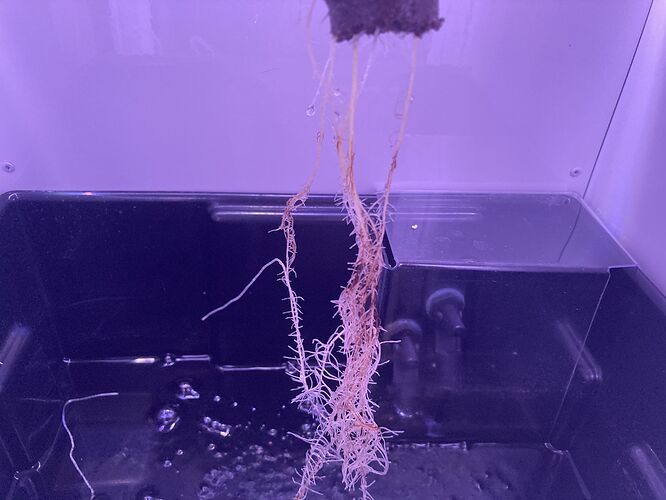 image4032×3024 1.16 MB
Top - Ilana
Bottom - Abbi
I am feeling a sense of relief. This is the first time I have checked on Ilana in the last few days and seen a notable improvements. I’m not sure what changed except for the fact that I added a little bit of distilled Water to the tub. As usual Abbi is looking great.
The most surprising thing to me was how much the roots of Ilana whitened after looking quite brown before.
2 Likes
((#ItIsAlive)): :seedling: :herb:
El_Lobo November 24, 2020, 9:20pm #14 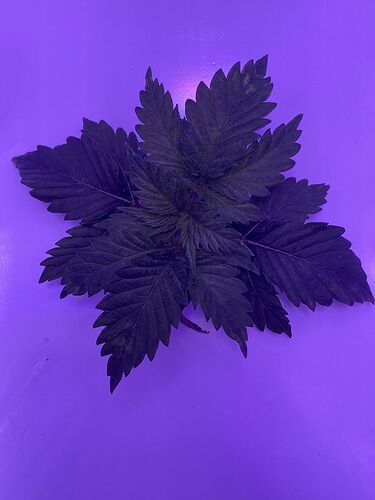 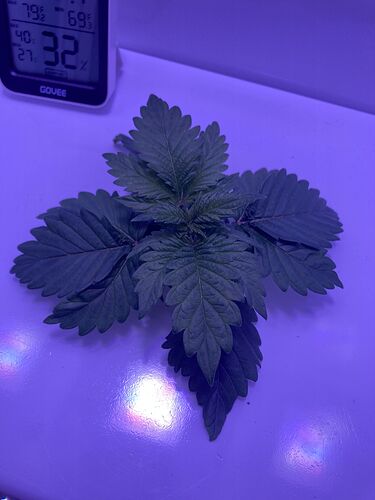 Today I realized Ilana might have some discoloration and a few slightly withered leaves, but she is actually taller than Abbi, if not as lush and thick.

Today was water changing for both the gals. Hooked both them up with Distilled water. Found a source of cheaper Distilled water. 9 for $9 instead of 8 for $10. That’ll help a lot. I’m hoping this fresh batch helps out Ilana some. She is sucking up way more acidic solution as well as 3, 4, 5.

So far I’m loving this hobby. I’m considering a humidifier next. Today I realized where I can route cords through if I want to hook up a fan inside without it being battery operated.

Last week I ordered 5 WiFi cameras. They were from a recommendation I read on here. So kudos to whoever recommended the Wyze cameras. Apparently they are making a third version that adds some improvements and new features. One is going into each of Ilana and Abbi’s grobos. I have a Solid Grobo and don’t like to open it too often unnecessarily. Would love to monitor 24/7. Will need power to them, and now I know how to do it. Although, any advice for doing so is greatly appreciated. 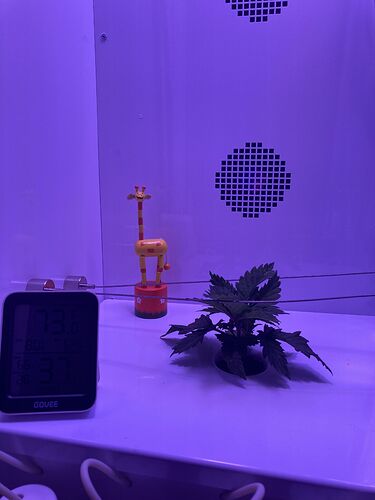 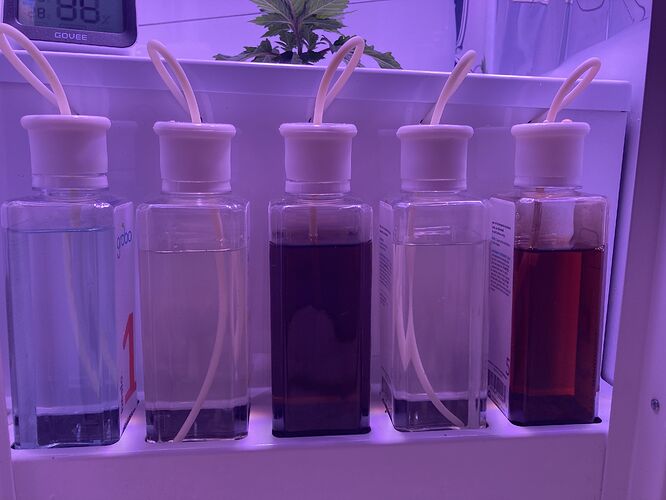 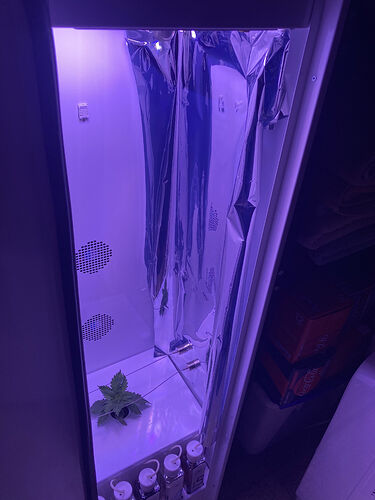 Main question before talking about anything else: Is it a good/bad/neutral decision to put some remaining 1-way window treatment inside the Grobo? It obviously reflects light because you see your reflection on one side. I had read mirrors aren’t good but that Mylar is good. I THINK this is Mylar but not certain. Has anyone ever used this stuff to reflect light and get more use out of the same light output?

I’m both worried and optimistic about Ilana. She has much less green on her compared to Abbi (pics to follow of that beauty). Although she has definitely gotten taller, some of the leaves underneath are really withering away. At the behest of Grobo I was told to start doing some light bending of the stems. She has a lot of yellow spots and discoloration but I don’t see any sort of bug bites. I don’t see any obvious signs of fungus or mold. The roots on Ilana are whiter than those of Abbi. So I’m not sure what’s going on. I’m hoping this fresh batch of water continues to have a good effect on Ilana’s growth.

I wanted to bolster Ilana’s confidence by giving her a fake prize. I gave her the giraffe award for stretchingee up so high like a giraffe’s NECK!! I’m so proud of my discolored baby. She is nice and TALL!! Also, I wanted it to be easier to distinguish the two for my fans at home. And, let’s be honest, how many small figurines can a single man with no kids have lying around the house? Yes, ladies. I’m single. Come one, come all. 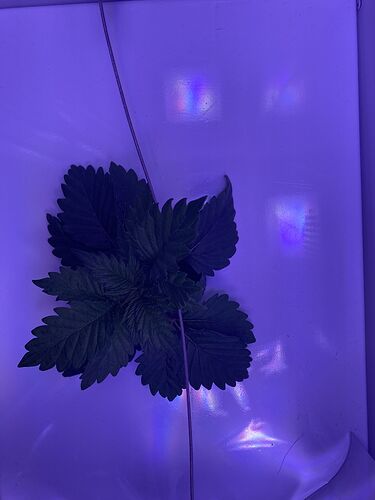 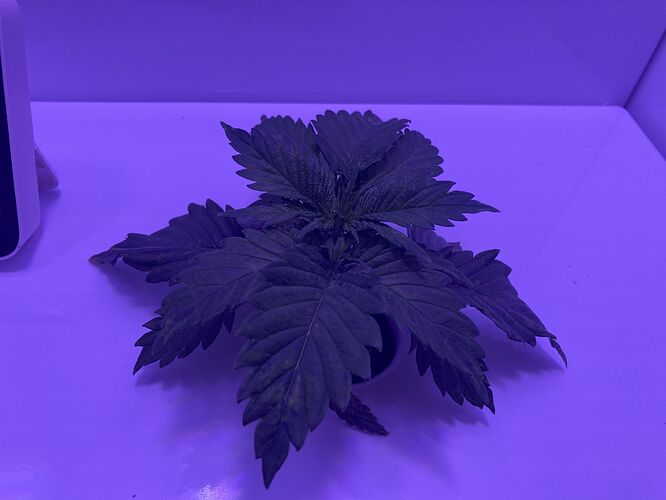 Abbi meanwhile is a thick girl. She is greener than Roy G Biv himself. Seems like all the leaves are growing pretty well. I did less training on this one.

If anyone sees anything I can do to improve, please, help me live my best life!

Today was water changing for both the gals. Hooked both them up with Distilled water. Found a source of cheaper Distilled water. 9 for $9 instead of 8 for $10. That’ll help a lot. I’m hoping this fresh batch helps out Ilana some. She is sucking up way more acidic solution as well as 3, 4, 5.

By the look of your nute bottles # 1-2 they are dispensing a lot at this early stage of your grow. The probes are supposed to come factory calibrated but I think you need to calibrate your pH and EC probes asap.

One of the probes is supposed to come in a liquid and when I got my two Grobos, one of the containers which should have held liquid was dried up. I was concerned but decided to go ahead anyway and cross my fingers. I was worried that was the problem.
Thanks for the heads up. I’ll do some research and find a way to calibrate it. I know I’ve seen a video about how to do it before.
If anyone has any advice on that, I’m all ears, but I won’t sit on my hands meanwhile. I’ll try to find my answer. Thanks again for the help. 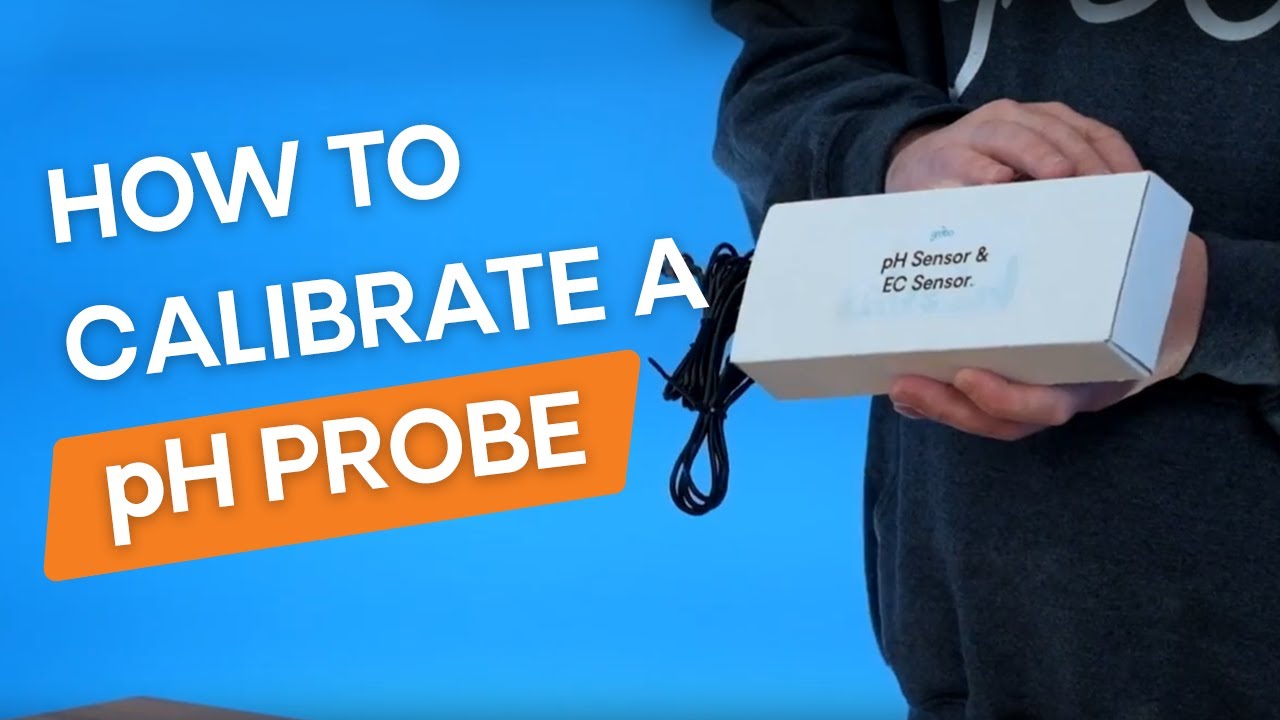 You can mark your bottles every time you do a drain/fill to see if the nutes dispensed or not. From my experience, I noticed my bottles #1-2 dispensed a lot less after my probes were calibrated. I’ve heard other folks here that had to calibrate their probes for their first grow.

Sorry this isn’t the best pic as I’m not home right now: 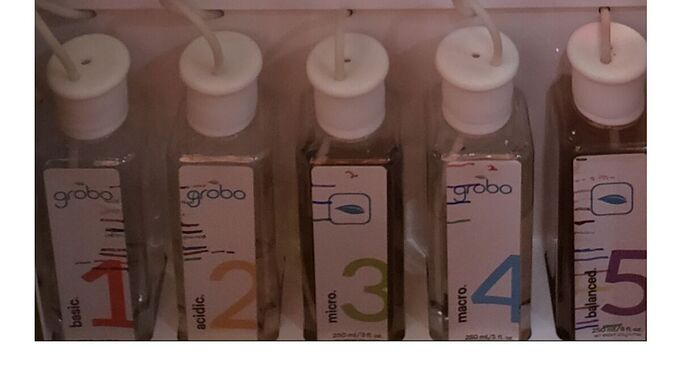 I bought the Bluelabs kit below. It’s expensive but it’s a recommended/trusted brand. The kit provides a few sample solutions so after a few calibrations, you’ll need to get some more solution.

There are other pH & Conductivity pen kits out there that are less expensive but I’m not sure about the quality/accuracy of the product. Alternatively, you can just get the calibration solution.

Thank you for the helpful tips. I ended up buying a bunch of stuff off Grobo this Black Friday. Besides their new Seedling Grobo I got, I also purchased a calibration kit. I almost bought a new probe but I’d rather first find out if I can get this probe to work properly. The other thing I’m anxious to incorporate is the water temperature thermometers.

Yesterday I did something that scared me and I didn’t want to admit it. Perturbed by my Ilana’s pH down bottle being so abused compared to Abbi, who hasn’t touched any of the first two solutions, I decided to use a plastic straw to get some pH up solution into the water basin. I hesitantly put just a little bit. Today was the best turn around I’ve seen from Ilana. She looked greener and fuller. Also slightly taller. I’m not as worried anymore. Hopefully a calibration will fix things. I also took the hose out of the pH down solution so a Ilana wouldn’t get anymore. 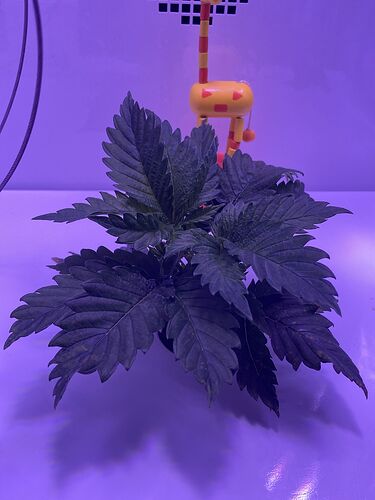 The other thing I did was I topped both of the girls. I was kinda scared and was going to ask for advice beforehand. I think it might have been slightly later than it could have been, but maybe I’m wrong. Below is a picture of where I cut Abbi yesterday. 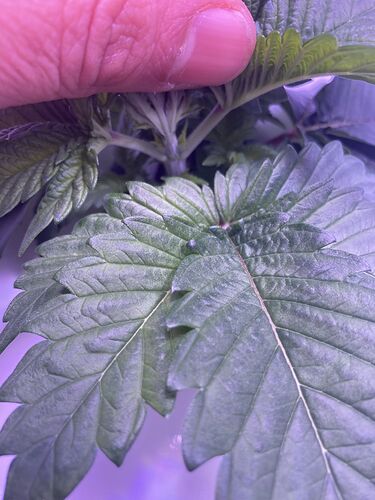 Today I removed a couple drying, wilted leaves from Ilana. Abbi is looking beautiful as always. So jealous was Ilana of Abbi’s growth that I gave Ilana some towels on top of her to keep her almost as warm as Abbi, who is mostly enclosed by a closet (I leave the door cracked open for circulation). Below is a picture of the adorable Abbi! 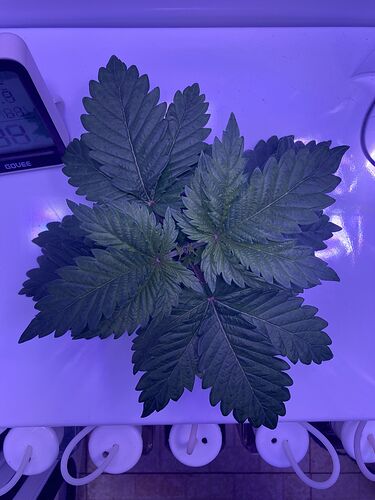