had a fun time setting up as it had a hard time connecting with my wifi in the other room I originally was going to set it up in but it looks just as awesome in my living room next to the router ( wifi issue probably due to the fact there is so many wifi signals competing in my area 6 alone in my apartment). Now for the waiting game to see how the seed goes. 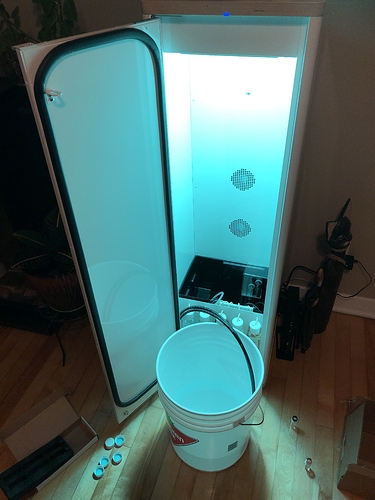 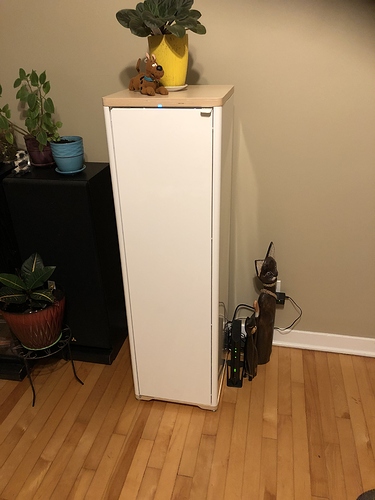 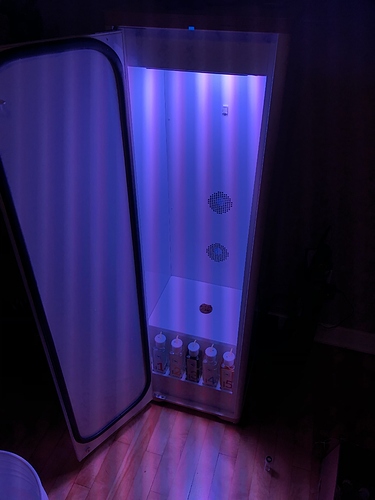 Congrats on the purchase and welcome to the AG forum! This is a great community for seasoned growers and novices like myself. I’m on my first grow and at the transition stage! Good luck!

@pha720 thanks and good luck to you too

@Mikev <-- woops wrong person… got it right now. good luck with you first grow! I’ll be watchin! I’m not far ahead of you so we are all in this together

GG#4 is a nice strain, good choice. The genetics can be super tall in this plant tho as far as I know so be prepared!

Also, @Mikev what other supplies besides the Grobo do you have in your arsenal, for instance, temp gauge, humidity gauge, water temp gauge, etc. I think if you list some you do have some of us here might be able to suggest something you might have forgotten.

Welcome. One tip that you’ll find floating around this site. When I was having Wi-Fi issues. I switched my Wi-Fi from 5G back to Low-Fi (2-4G’s). I understand some people don’t have this option available. Example: When searching for Wi-Fi connection look for the NON- 5G connection option. It’s also favorable in apartment setting because most people won’t be using the NON- 5G WI-FI connection option. So the unit won’t be competing for a signal.
Just a lil tid bit that may or may not be helpful. 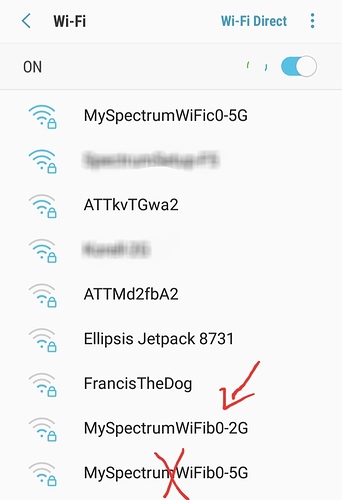 *Also in the pic. Is a device label (Ellipsis Jetpack) that offers PROTECTED WI-FI CONNECTIONS for devices in your home.( I do not use this device however it’s note worthy)

@Chem13dog Yeah I actually read this some where on here about this, just from people sharing this was the only way I got the wifi set up thank you all was very helpfully

this forum so much knowledge in one place 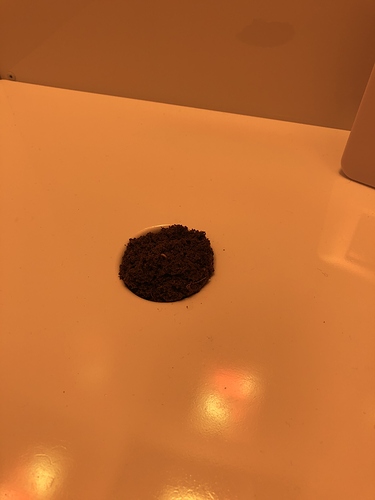 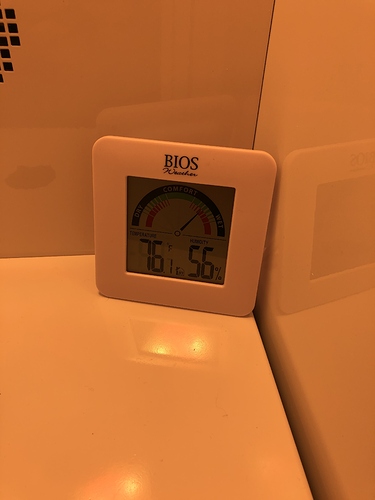 hopefully in a couple days it should fully emerge 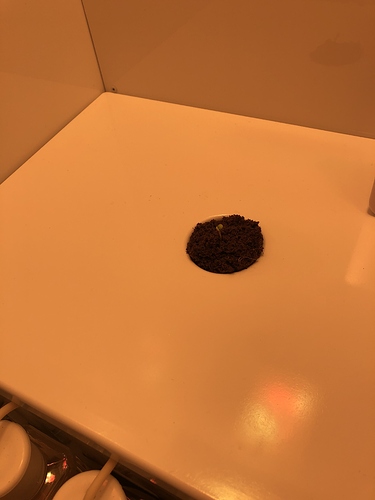 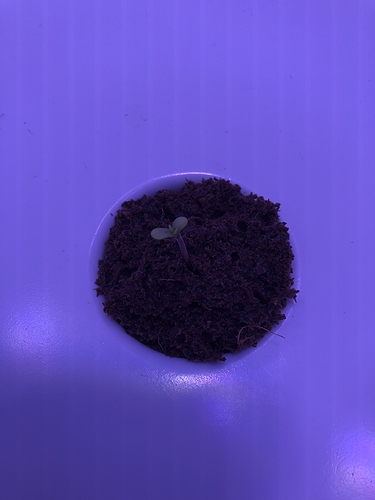 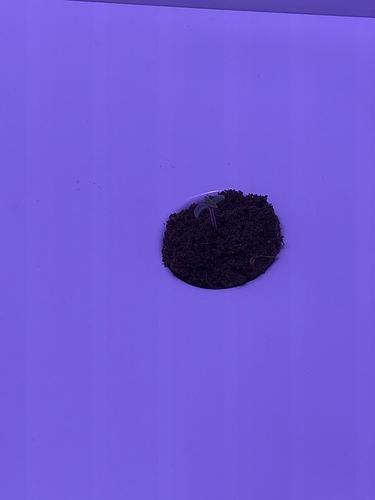 Just checked in on it on lunch and it’s going good even have some roots coming from the coco pod now. Here’s to hoping the power will stays on we’re supposed to get hit by a tropical storm tonight 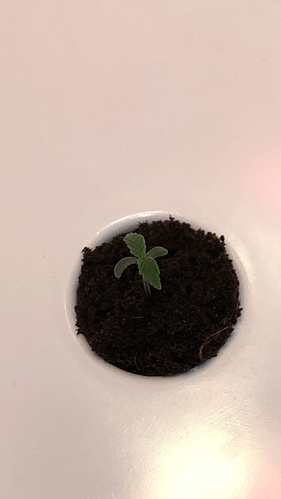 Tropical storm lost its power and I didn’t lose mine

im in day 7.5 out of 10 next will be posting when I switch into early veg so far no issue other then temp control but once it goes into veg and those fans come on should help with that

I would be careful with water temps that high, seems like just playing with fire honestly. I would get Hydroguard asap if you can’t get a water chiller, which is the same case for me, I don’t have the money or courage to try to install something like that. Luckily I battled with higher water temps for only a couple of weeks around here. I am going to get a dedicated AC for this room and keep the doors closed next summer to try to keep it at a manageable level. I would have 100% used Hydroguard in my first week instead of starting on first drain/fill as well in my next grow to be safe.

Grobo DOES support the use of Hydroguard btw as well.

Your roots aren’t down in the cocopod yet, I would order ASAP, maybe even consider getting an Amazon Prime membership and cancel it for some fast shipping or something, or pay for expedited shipping instead, whatever would be cheaper, unless you think you can get it in the next week without that. You might be able to get it delivered by Sunday if you sign up for Prime and act quickly.

I can’t tell you for certain that the roots not down in the res is even safe in itself, but from my experience on these forums the root rot problems happen longer down the road, and if you are vigilant you could catch browning roots or white mold and have some experienced champs help you combat the situation.

I would say take pride in the fact you’re aware of dangers before you let them become a problem and you still have time to act. I’ve seen some grows on the forums that haven’t had a water temp and let the plant do its thing for awhile and then wonder why their roots are all brown and mushy

Thanks @pyromancy I have been looking on amazon but I was planing on making a trip to another city in my province to check out their hydroponic store soon.
I have seen some horror stories due to root rot so figured better to be proactive then reactive , I’ve been waiting a long time to do this and I really don’t want to mess it up😂
I pretty much plan on doing the same thing as you , probably won’t need the ac coming into the winter months but I’ll have to play that one by year.
One bright side to starting my grow around this time of year is I will get to see the various climates from hot and humid now leading into the cooler months should be interesting to watch and see how that goes.

Sounds good. I realized after I posted maybe you’re lucky enough to have a hydroponic store nearby!

I think with hydroguard and the coming cooler temperatures you’ll be okay, I would hope!

I actually have to keep the heat on now already at some points to make sure my Grobo stays in the 68F or above range at night when the lights are off. So far so good, but I could see having to make a change to the on/off schedule at some point if it became bad; leave the light on at night and keep it off during the warmer part of the day.

That’s actually a good idea I might just do that too if it becomes an issue , good thinking

I don’t know why companies who make WiFi routers designed them so you have the option to merge all of the 2.4 GHz and 5 GHz channels into a single SSID (channel). They are unreliable, and there are still a lot of new devices, such as the Grobo, that work best when connected to 2.4 GHz. When all the channels are merged into a single one, your device will switch between 2.4 GHz and 5 GHz depending on which one has the strongest signal, and the fastest throughput.

When I got my current WiFi router I tested the connection speeds in various places in my tiny apartment, and the performance dropped significantly when I had it set to merge all of the channels.

Short story long: If you’re having connection issues with your WiFi log into your WiFi router and see if there is an option to keep the 2.4 and 5 GHz channels separate.

That’s interesting info. I purchased my 5G service at a later date and always assumed that the connections remained separate because they were simply two different ip connections. Never occurred to me that they’d be working in conjunction with one another at some points nor would they merge. I just figured this is the old connection they leave you with and give you the new one as well lol. This is useful information to have though.