No speedo is just full of shit. That’s why I canceled

Hello
My name is Paulette
How are you
I was wondering about Seedo
They blocked me
Been waiting for2 yrs
They don’t answer calls or emails
Are they a scam please tell me no,

Is seedo a scam

Is SEEDO a scam

When I was waiting for my seedo I contacted them on Facebook messenger demanding my money back. Within an hour someone messaged me asking for my contact information. They called I asked for my money back they tried to talk me out of it. I stood strong got a refund in 7 days.

There are people on here with seedo machines! Maybe ask them for a contact number or email to see if there are other ways of contact.

That’s exactly how I got my refund, since no other communication channel seemed to be open.

They dont give you contact information. They call you. You have to request to be called.

Seedo is a scam, but it is odd that snoopdog slapped his name on it.

I ended up having to file a dispute with my credit card company to get my deposit back.

If you join the fb group you’ll find very few people got their devices and most had been waiting years no longer get responses. I check some of their network and w/Zendesk. No valid support account.

I figured that yup !
I will be getting refund hopefully lol

Seedo is a scam

I’m in that group, I don’t think it’s a scam. People are getting units slow as crap with multiple quarterly delays for some. My take is it has several design issues, it’s basically a mini fridge that comes with some serious complications primally mold growth as my main concern and some people are going on their third replacement unit. I don’t think it’s vaperware but don’t see a rosy future if things don’t turn around. Snoop I think is just a paid endorsement as far as I can tell.

Hello @Azuri My refund was supposedly processed by Polina the first week of sept.

This never happened. I call, they never answer (doesn’t matter what time of day). I emailed dozens of times without a response. Emailed multiple email addresses including their support email and not just info address without a response. Contacted Zendesk as the company I work for utilizes this for contract support for a single client. My rep verified their is no seedo or seedolab(s) account that is valid w/ them. Couldn’t tell me much more about it. I suspect it’s in collections or never valid. You open a ticket and you’re provided a link that goes to a “webpage not found”.

Seedolabs has no social network accounts which is suspect. Not for any of their employees, top brass or CEO. None. They had a Twitter account in which was deleted some time ago which was bombarded with angry tweets from disappointed purchasers so it was removed.

I paid in June and was told that my unit would be delivered in August - this was promised in email in which they explained they had just setup a production facility in the US to stop delays at the border. I Contacted seedolab in sept. Requesting an update on delivery. I was told it could be another 90 days so I requested a refund. I wasn’t willing to wait with all of the others whom echoed the statements made here.

I started emailing again 30 days after this roughly October 15th. I sent a single email literally everyday requesting an update on my refund. Not a single response other than automated “we’ll get to this within 72 hours” email response. Last week I ultimately had to dispute the charge with my credit card company.

While I’m not surprised that snoop would endorse a product for his own gain, I am surprised his people didn’t do their homework on the unit, the company and its troubles. The vast majority of purchasers have NOT received their devices and the company no longer communicates with their purchasers. Folks that paid years ago are left in the dark with little recourse. This is a pretty common complaint in that fb group and twitter. It was no different for me. Promised delivery dates, email suggesting a hold up (insert excuse here), request refund, email suggesting a refund is processing and it may be a few weeks before it posts, never happens and communication ends.

If it walks like a duck & quacks like a duck it’s likely a duck. While I agree that some folks have gotten their units (very few), from what I can tell the vast majority have not. I’ve been watching the progress of the person on AG whom has a unit. I even asked him if he worked for seedlabs as you won’t find many “non-professional” seedo videos on YT. His device seems to operate without issue which is why I continued to wait (I still want an automated unit that works). The problem is the rest of us whom bought in and never got a unit or have major difficulties just getting a refund or even a response to inquiries. I made sure to file a claim with the FTC as well.

We’ll see a lot more of these scams as more US states legalize cannabis and potentially at the federal level.

I’ve been critical of grobo since my unit was a lemon, but Imo - As of today, grobo is the only “working” automated unit that delivers ontime and communicates with their owners and seedo is fraudulent. Im only basing my opinion on my experience. Your opinion may vary and that’s fine.

None of these are active on cloudflare although they redirect to Zendesk actual site in Virginia. Go ahead and click the link you’ll find this 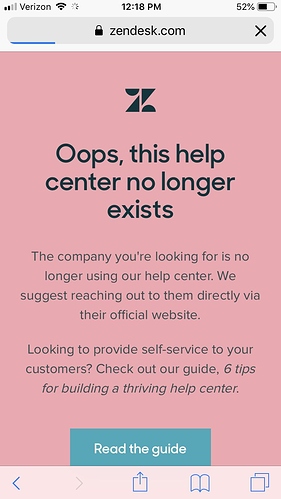 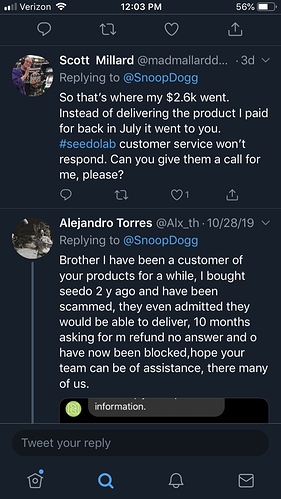 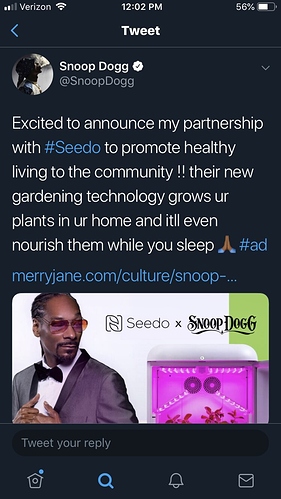 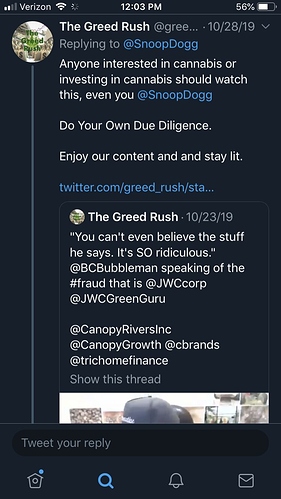 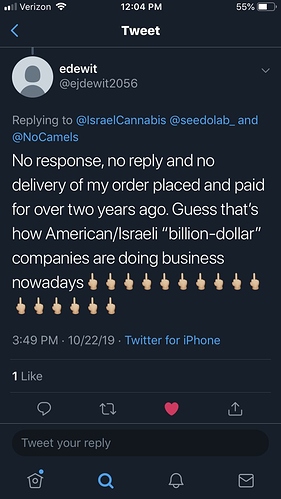 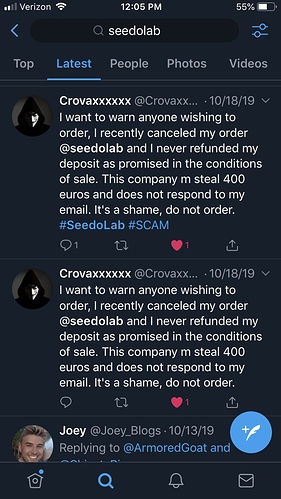 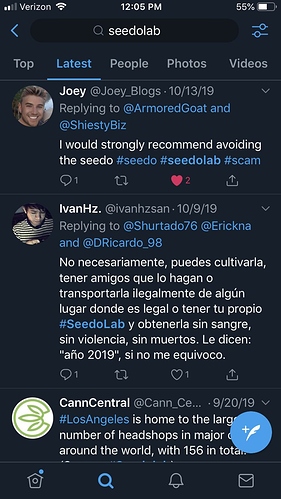 Be careful folks, do your homework before placing a down-payment on a seedo. If you want an automated Grow device Grobo is your go-to for now

@James @Azuri @Southrock67 - Seedo is a public company so you can actually see a lot of behind the scenes information in their disclosures here: https://www.otcmarkets.com/stock/SEDO/disclosure

Their latest financials have them burning almost $1M USD per month and running out of money around now. I’m assuming that’s why they’re cutting back on customer support among other things: https://www.otcmarkets.com/filing/html?id=13592534&guid=16MSUqJkJZ0nA3h

For the Snoop Deal, they borrowed $1.1M USD (Disclosure here) and then paid him $1M plus about $1.7M in shares (Disclosure here) to be their brand ambassador. As part of this deal they have also agreed to give away Seedo units and pay the expenses for hosting parties and events.

It also looks like yesterday one of their directors stepped down due to “certain deficiencies and conflicts of interest by some of Seedo’s board members and employees”. Granted, he’s in some hot water of his own already for other issues. (Article Link).

Hopefully that helps to shed a bit of light on your questions!

This was very helpful @bjorn

I want nothing, but the best buds for all and simply don’t want others to be duped like I was or felt like I was.

is supported and delivered on-time.

I only have like 1300 followers so I don’t know if it has any value, but it’s really disappointing to see snoop whom has the ability to reach millions advising people to buy into a potential scam when they could be buying a grobo. I know damn well snoop won’t be responding to a nobody like me, but maybe it helps one person out there make a better decision. While seedo is a public company and appear legit from a business prospective they’re clearly not doing right by their customers/investors.

I went ahead and deleted my comments on the “Mary vs Grobo” thread as well. I would be interested in reading more material on the other Grow devices such as Mary, Cloudponics, leaf ect if you have any you want to share.

Thanks for those insights. Just trying to get my money back right now. Still sad that grobo is not available in Europe which leaves me with no alternative

I was lucky I paid with PayPal so I use that leverage on them to get my money back.

“As you know, I believe in the great potential of the company’s technology – both in the home grow device and especially in the agricultural product under the purpose of “feed the world”. However, I feel that I wasn’t able to implement the change in the strategic focus of the company, in order to focus the company’s resources in one direction, and in addition, my recommendations to strengthen our board with new professional members with experience and reputation were not accepted. Furthermore, despite my insistent pleading, I do not feel comfortable with multiple conflicts of interests within the company and its board of directors. These matters worsen when the company is in such early stage and is fighting for its financial survival.”

Thanks for the update @bjorn

Yeah the short version of what I read and stand by my original statement. Badly managed and I’ve seen the design issues 2nd hand in the FB group.

As of yesterday @James people were getting units delivered. (UK now) I disagree with the sentiment it was set out as scam, just piss-poor roll out, launch, customer service etc etc. To be completely clear I’m not endorsing their product, I’m just looking in through the window I don’t have a dog in the race and no emotion of being “scammed”. Just a discussion of other products in the market.

In the dragons den episode Arlene’s concern was in investing in the hardware side of the market, she’s right in the case of Seedo. After warranty is over the pitch forks will be coming out. (they are already out they are sharpening them now)

I was aware of the SEC notification for Snoop’s “endorsement” regardless of what happens to Seedo you can bet he won’t lose any money. He’s not a fool, easy money for him.